Dreaming about getting chocolates as gifts this Feb 14 and nowhere is the presence of the regret following that? Well it is more than wishful thinking- chocolate can actually be good for your health!

It comes but with warnings! Once in a while you can be excused for going overboard for your love of chocolate and intaking those additional amounts of sugar and fat! Let yourself succumb to the sweet sin of dripping dark chocolate this romantic Pink February! Nothing provides you a better occasion than celebrations- of love, of togetherness and of happiness. Oh and ofcorce your doctor would agree, at least the happiness part!

Despite its sweet reputation, dark chocolate has a low glycemic index similar to that of oatmeal — meaning it does not send your blood sugar spiking. Chocolate hasn’t gained the status of health food quite yet. Still, chocolate’s reputation is on the rise, as a growing number of studies suggest that it can be a heart-healthy choice. 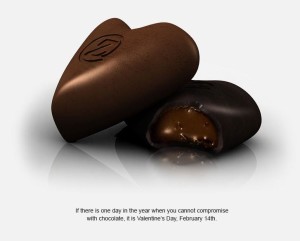 And yes as Valentine’s Day each year does remind us of the dear Hearts’ we care about so much. The reputed aphrodisiac qualities of chocolate are most often associated with the simple sensual pleasure of its consumption. Although there is no proof that chocolate is indeed an aphrodisiac, a Gift of chocolate is a familiar courtship ritual. Don’t forget to pack in the diamonds though! One study indicated that melting chocolate in one’s mouth produced an increase in brain activity and heart rate that was more intense than that associated with kissing, lasting four times as long after the activity had ended.

Buoyed by positive findings, more research is being conducted on chocolate’s health benefits, including potential cancer-fighting abilities and improved cognitive function. It certainly has a role to play in future health squad. But excessive consumption in order to reap a little more of the cardiovascular benefits would be nothing more than ‘cutting off one’s nose to spite one’s face’.

If there is one day in the year when you can’t compromise with chocolate is February 14. This Valentine’s Day send a chocolaty cupids’ arrow to pierce and strengthen the heart of your beloved!