Kresha Bajaj, an Indian designer drove everyone around her crazy while deciding her lehenga for her wedding with Vanraj Zaveri, scion of the family that runs the jewellery chain Tribhovandas Bhimji Zaveri & Sons. She took on the task to stitch her own love story on her lehenga because she felt like

“What was I going to do with a lehenga that would just sit in my closet, never to be worn again?” 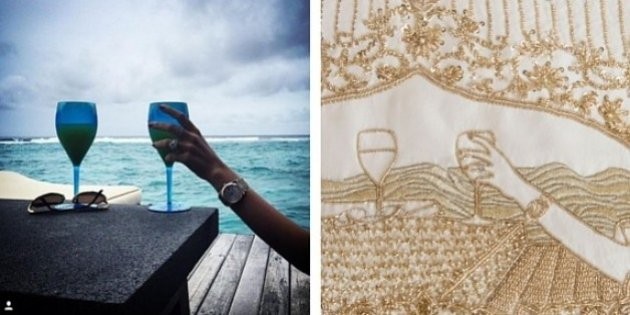 Never being a fan of heavy traditional attire, she did not know that she was going to set a trend for weddings this year!

She was inspired by the ‘Real Housewives’ television show star Adrienne Maloof who got her wedding dress framed as an art piece in her wardrobe. 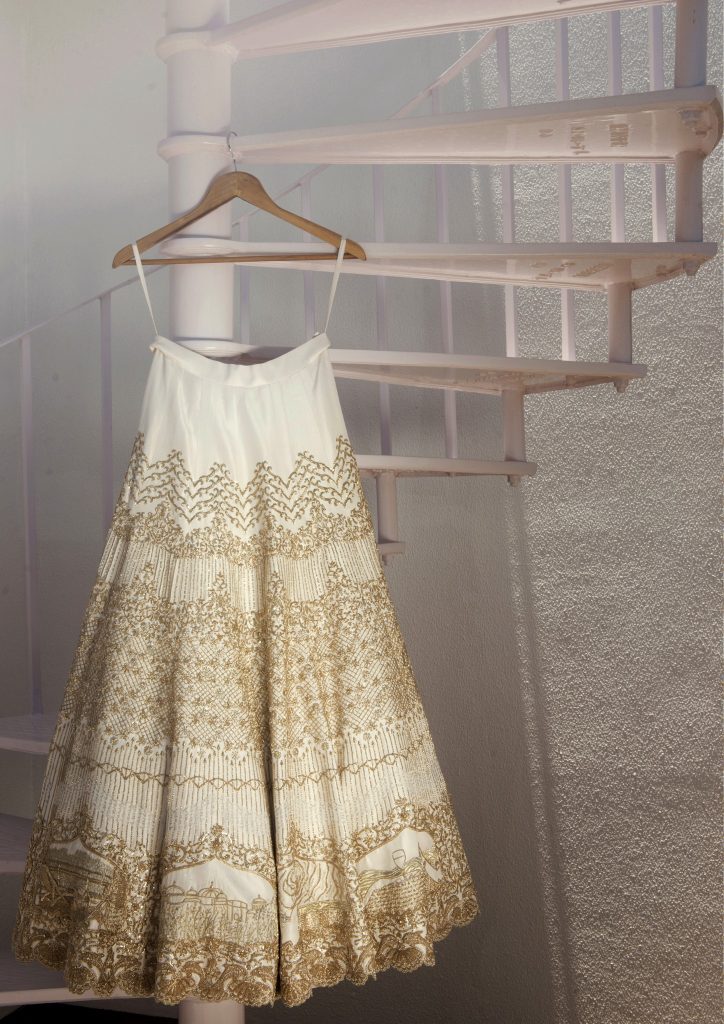 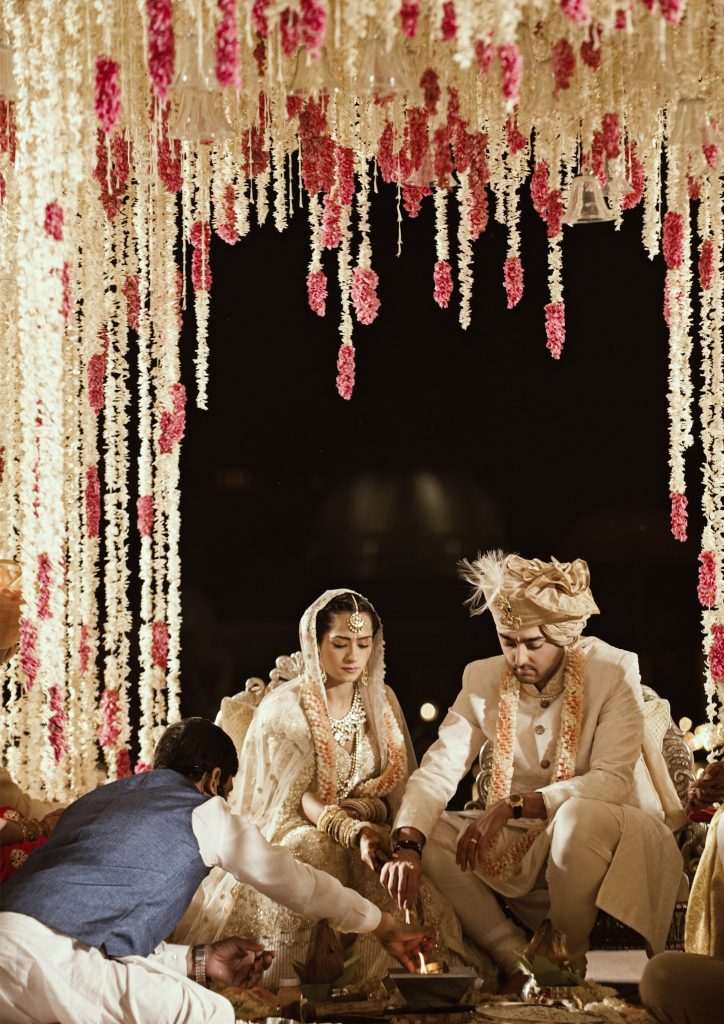 She shared that the process of getting the lehenga done was not at all easy.
She said,

“Initially it was a bit worrying because we didn’t want it to come out comical,”

She told that her groom chose white and gold as the theme for their wedding trousseau so she spent hours with the karigars who were stitching the little milestones of their love story.

“The image of two people clinking their glasses is inspired by Vanraj’s first Instagram post after proposing to me in the Maldives,” said Bajaj. “We had just popped a bottle of champagne, and he clicked a picture of me with the glass of champagne and the ring.” 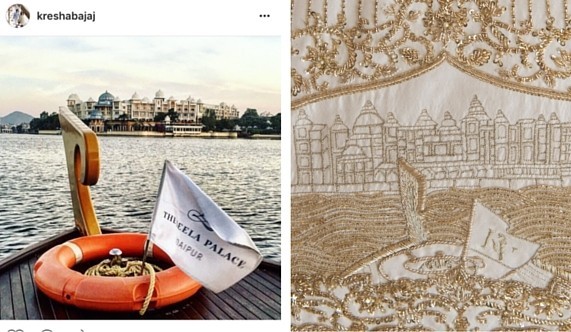 Another scene is inspired by the picture of their proposal posted by her on her Instagram and the other one is from their wedding venue.
“This one of Leela Palace Udaipur, where we got married, is from the time when we were going to the hotel in a boat to finalise our weddings preparations,” she says.

Their names have also been embroidered in the repeated pattern with the zari work. 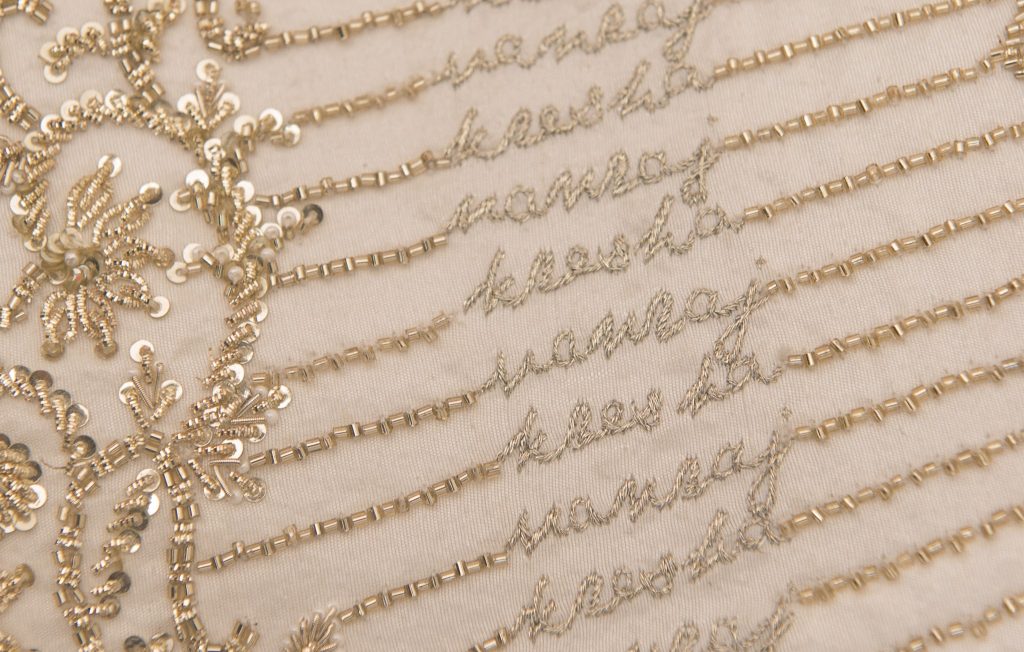 The hem of the lehenga and the dupatta are adorned by the jumping dolphins and there is a deep meaning behind it.

“Vanraj and I knew each other as kids but never really got along. In 2014, we found ourselves working on a project against dolphin captivity together, and that’s when we really connected.”

Her guests did not catch on to the story on her lehenga but were fascinated when they heard about it. The brides all over the world have loves the concept especially in Australia and London. Now, Bajaj says she has opened a service to design similar custom-made bridal trousseaus. The price for which will range approximately between ₹3.5–12.5 lakh, however, Bajaj has said she can work within a client’s preferred budget range.