You are at:Home»My Story»He Was Constantly Staring at Her Boobs! Story of Laiya.
Last Updated: May 18, 2017 | By: Shilpi Singh Bisht My Story
Twitter Facebook Google+ Pinterest Whatsapp

It was a hot summer morning. The sun was merciless but Laiya had to wake herself up to reach her destination. Being a girl of 20 something she was dreaming big this time. She set plans for herself in a way that they were actually making her come out of her comfort zone. Girls in her city were not really into taking risks. Maybe, because every girl was brought up in the same way and the same set of notions were installed in their systems since they were born. Probably, Laiya was the first one who stood up for something like this. It was a constant contemplation before she could finally make up her mind and come up with such a courageous decision. Well, I think it has become really old and boring debate about the validity of girls leaving their old ways of playing safe and dreaming of flying.

Did I say flying? Damn! Laiya was getting late, She had a flight to catch up at 1:00. There she ran with a heavy set of luggage. She packed all her favorite toiletries and makeup. Maybe, that was the reason why she was struggling with her bags. But anyway she somehow made her way towards an empty seat in the airport. A gray, empty seat! And of course ventilation from the back! She carefully placed all the bags on the floor, cleared the strands of her hair irritating her pink face and there she sat. Laiya was one of a kind, she was a mix of almost everything. That girl can give you a strong sense of Deja Vu if you ever happen to cross her path. 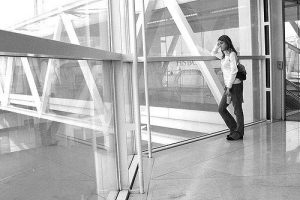 While waiting for her flight to arrive and her dreams to take off, her heart was beating fast, faster than ever! She saved for this day all her life! A SOLO trip! The thought of traveling the world alone didn’t even fade and a man of 30 something sat next to her. Laiya collected herself as if she was trying to hide somewhere. The hazel eyes of the man were piercing through her neckline and directly onto the breasts. I think he was confused or tempted maybe, by the shape of it. Laiya froze!

“Are you travelling alone,”

“Please keep your hands in control because they are touching something which belongs to my body and soul!”

She picked herself up and ran away!

I didn’t hear or see Laiya after that! Announcement after announcement of her name faded and people after people boarded the flight and no trace of her. But I still have a note which I think she forgot at the airport, which said,

“I wanna see the world before I die.”

It sounded like long kept dream to me. I can’t really understand what happened! Mere a body part of a girl can make her dreams fade? I don’t think I’ll ever get the answer to this!

Can a girl’s body ruin her dreams? Is it that powerful or that weak?