Bicycles are great for an exercise and making short travels. Some people even use it as their everyday transportation to work. It doesn’t only save you from gas expenses, but you also contribute to human welfare and greener environment. The only hassle if you use a bike is the high risk of it getting stolen while parked. Or if not the bike, some parts like the tires or the pedals. If you can only take it inside your office, you can make sure you can still ride it home. Good thing somebody got tired of hearing reports about parked bicycles getting stolen and started to develop the ‘folding bikes’. 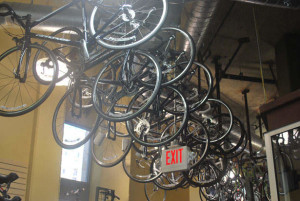 There are bicycles that can be folded into two or into three. While it’s a fact that the folding bicycle idea originally came from the Brits in the 1900s, it’s only this late 90s when it started to explode in the market. These two-wheeled transportation usually have smaller tires compared to regular bicycles and are more designed to take rough roads than to be speedy. However, there are newly released models now that can be at par with regular bikes’ speed-ability. This sort of bicycle is classified into three according to the folds. The first one is called ‘breakaway’. This fold is designed to fit suitcases for airline flights. The second fold category is called ‘triangle hinge’ which allows tri-folding. The third category is the ‘mid fold’, sometimes called ‘half fold’. This last category is able to support larger wheels. Now, who says you cannot bring your bike in the office?