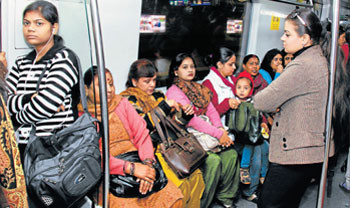 These will mostly be the college goers who’d stand at a corner with earphones plugged in their ears. They either close their eyes and escape into their musical world or go lip syncing with the lyrics, sometimes tapping their feet with the rhythm of the song. And then their are a few whose neon earphones play such loud volumes that you actually hear them playing ‘Chitiyaan kalaiyaan’ from the other end. 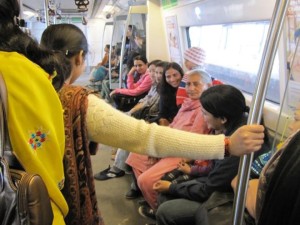 Now these are the one’s that we all hate. They would see that a seat for six is already holding eight people but they’d still try to prove that they’re slim enough to fit in any damn space. They’d make a puppy face and say, “thoda shift ho jayiye”, and the next you know is that you’ve lost three quarter of your seat to this pretty face next to you. 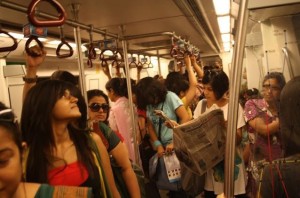 Now these are the ladies who’re frustrated with everything. They’re irritated that the every Delhiite starts for office at the same time as them, they’re frustrated that their net card doesn’t catch signal when inside the metro, they are cursing their freshly washed hair because they can’t tie them and they’re literally ready to kill anyone who asks them to make space. You better don’t mess with these as they’re sure that God hates them and since He is far up there, they might just spill their frustration on you! 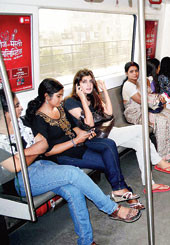 Yes! You got that right! She’s the one who’s constantly on phone and doesn’t understand the theory of ‘right time and place’. So she’d stand next to you and bitch against her mother-in-law, yell about the scandalous affairs of her bosses, crib about the rising prices, complaint about the lecherous friends of her husband, curse her kid’s school for scheduling their unit tests on Monday and what not?? If you’re traveling for the same destination as her, then you’re sure to get the details of everything that’s going on in her life by the end of your journey. 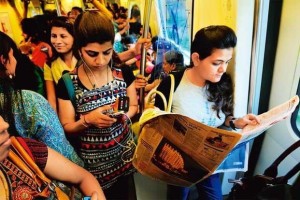 She’s the one with a novel in her hand, or maybe a newspaper! She’d excuse you if you ask for it, she’d smile a sarcastic smile on seeing two women engaging in a verbal spat, she’d give a disapproving gaze to those who sit on the floor of the moving train.. All the talking with her eyes because she’s likes it that way. She’d observe everyone and form an opinion about them but will not utter a single word. She is sweet but can be dangerous too. And i guess, I see myself in this category!